As many of you probably know by now, I like to cook ancient dishes - hence why I have a blog on prehistoric food (although it is written in Danish). It has been a little while since I cooked something prehistoric though, because of my new job... but for Christmas I got this amazing cookbook, "Latinsk Kogebog" which means "Latin Cookbook" - with recipes from Apicius and Cato... ancient Roman recipes, finally! So today, I did it. I made a dessert/type of candy from ancient Rome. It's called Dulcia Domestica, which I think means housemade dessert or something. It is a dish from Apicius' cookbook by the way and I love Apicius' dishes!

It consists of dates, honey, salt and different fillings for the dates... I used pinenuts, almonds and ground pepper, as the recipe said. Surprisingly, the one with pepper is not too bad either - I thought it would be too spicy, but together with the extremely sweet dates and honey and the salt, it's perfect. Now it is a little easier to imagine sweets they might have served in Rome on this board

Here are all the ingredients ready for the dish: 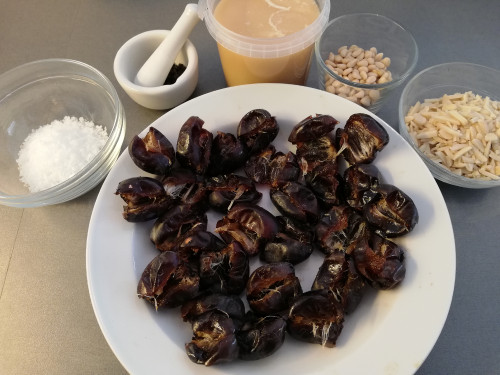 And here is the finished product, the delicious Roman dessert - I sprinkled them with more salt after they had been dipped in the melted honey, because it looked like much of the salt fell off in the honey. The reason there is three piles is of course because there are three different fillings in the dates 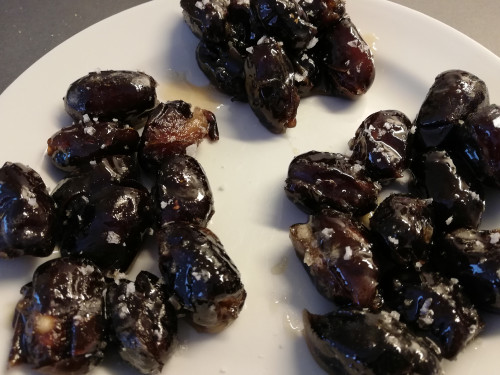 It tastes great by the way, very sweet, but good