Focussing on men's clothing because I'm far more familiar with it - also I got irritated by a story I was reading on AO3 in which the author quite obviously doesn't know the difference between a tunic and a toga. With screenshots because I like pretty pictures!! If there are any errors in this, I apologise for them! Please note I am not going to discuss military gear in this post as I don't know enough about it to give any accurate descriptions.

I don't have any pics of the underwear! This took the form of a long piece of cloth wrapped around the waist and between the legs and was called a subligaculum.

Next was the tunic. Worn by men and women, boys and girls, slave and free, citizen and non-citizen alike, there were several varieties. It was made of two rectangular pieces of cloth sewn up the sides (this gives the drop-shoulder look) and across the shoulders, or fastened by brooches. Men's tunics could be ankle-length or knee-length, and were worn with a belt so that the final length could be adjusted to the wearer's preference. They could be long or short sleeved and layered for warmth if necessary (Augustus was famous for wearing several tunics in the winter because he felt the cold). Workmen and some slaves wore theirs on one shoulder for ease of movement. Tunics could be plain or decorated with braid or embroidery, depending on the status and wealth of the wearer.

Tunics were generally made from wool, linen or cotton; silk was A. hugely expensive and B. considered suitable only for women, very highly regarded sex slaves (of either sex) or for the dining/party garment known as a synthesis. Men would never be seen out in public wearing silk. 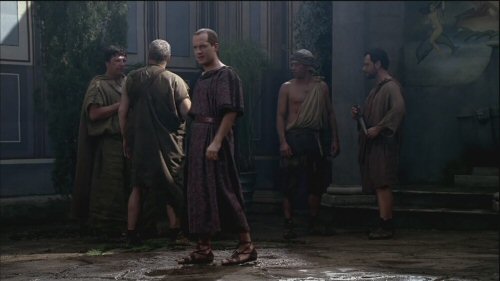 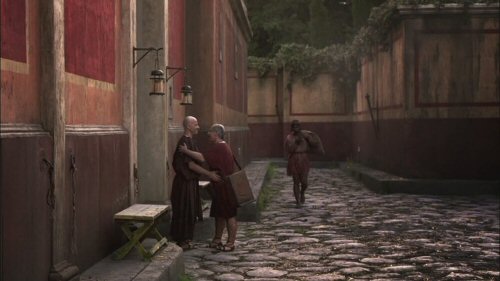 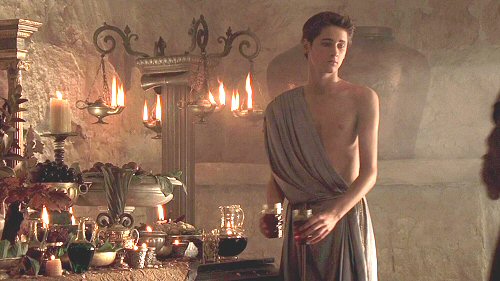 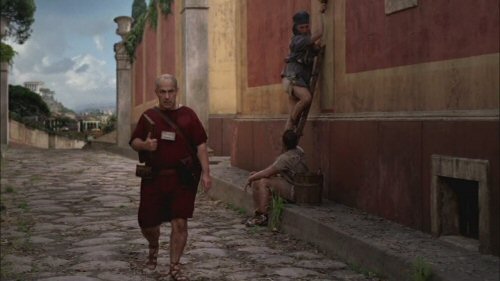 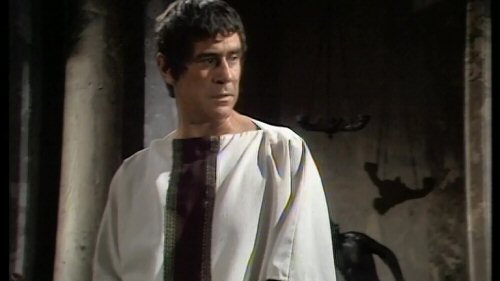 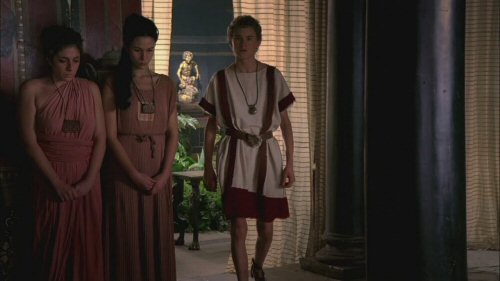 The senatorial striped tunic and toga were also worn by free-born boys, as shown above right. He is also wearing a bulla, a kind of good-luck charm that also denoted a free-born boy. On the evening of the day before he took his toga virilis, the sign of manhood, he would dedicate his bulla and the shavings of his first beard at the lararium, the family shrine to the household gods in the atrium.

The mark of the citizen, and the formal garment, was the toga. There were several varieties of toga: the basic toga virilis (plain white), the toga praetexta (with a purple border), the toga pulla (black, worn for mourning) and the toga picta (the purple toga, worn only by the Emperor). The toga was worn over the top of a tunic, either plain white, with purple stripes, or black with the toga pulla. Togas were woven of wool, were semi-circular in shape and could be up to twelve yards long by the time of the Empire. They were worn without any fastening, being draped over the wearer's body and held in place by their weight and the texture of the wool. The wearer could only put it on with the aid of a specially-trained slave, and then had to keep adjusting it as he wore it. 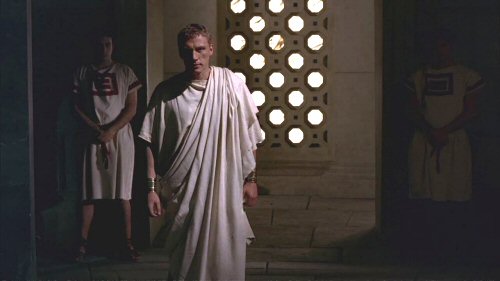 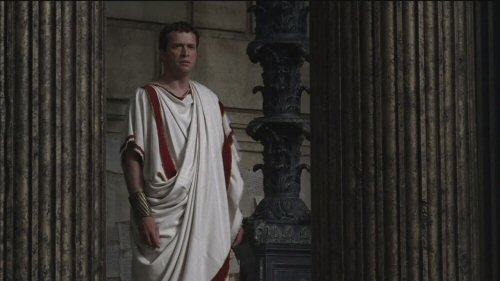 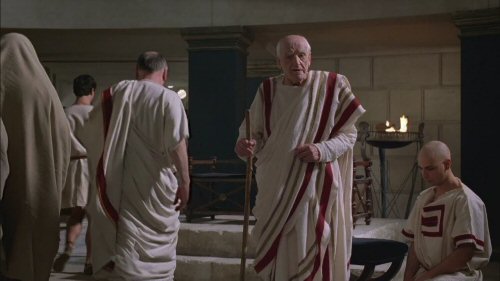 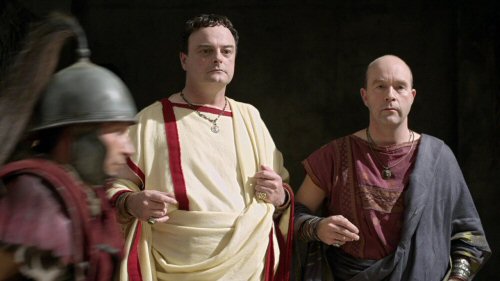 The fourth picture above shows another garment that was limited to citizens only, the pallium (plural pallia). This was a smaller, less cumbersome and less formal garment than the toga, could be any colour and could be worn over a tunic of any colour. It was often fastened at the shoulder with a fibula, a brooch, and could be draped any way the wearer chose, unlike the toga which had a specified way of being worn. 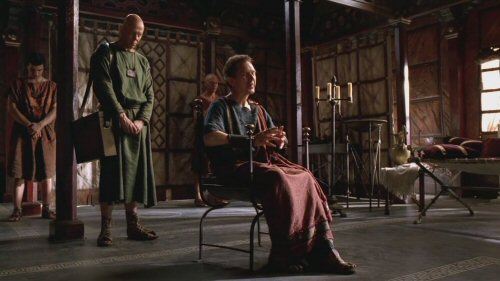 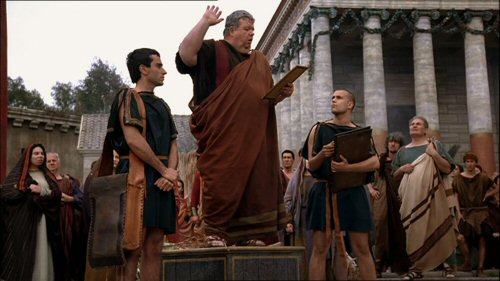 Please note how, in the picture on the right, above, the newsreader's slaves' tunics are sewn or pinned only at the shoulders, leaving the arm 'seam' open.

I'm putting this separately because I think Augustus is wearing a pallium rather than a toga picta, but it isn't easy to tell from this angle. 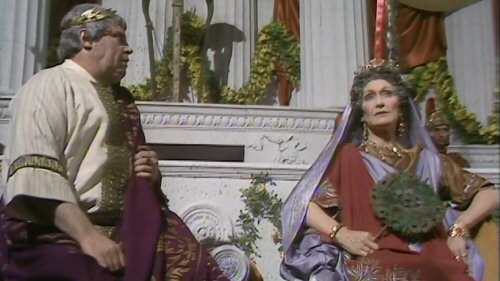 An outer garment that could be worn by slaves as well as free was a cloak called the lacerna, pinned at the shoulder with a fibula. This would be woven of wool and worn on damp drizzly days, in cool climates, and when travelling. 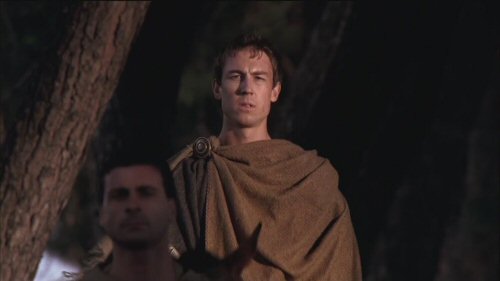 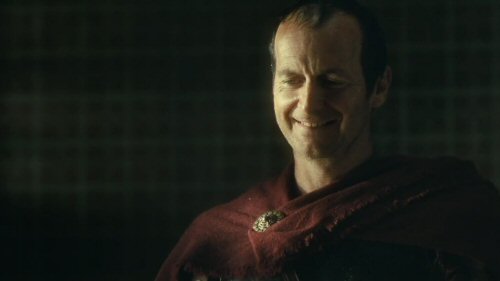 Slaves and poor working folk could also wear a simple poncho-style garment called a paenula, which would be made of a heavy felted wool. Please note that the below picture is not Roman, but from a medieval drama, but still gives an idea of what a paenula would have looked like. 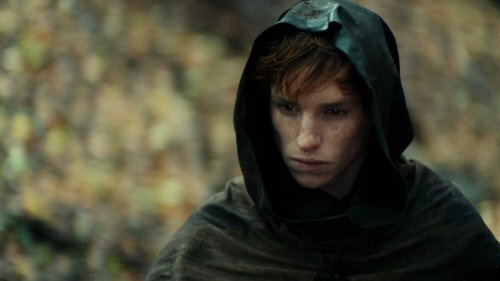 Clothing would be dyed using natural vegetable-based dyes (apart from a few colours, such as purple which came from the murex snail - the exact shade depended on several variables, including how fast it dried! Did you know that the blue that observant Jews used in their prayer shawls and for the blue thread in the tassels also came from the murex snail?). White would be the basic colour of undyed linen or wool, red came from madder, blue from woad and green from any of a variety of different plants. Other plants gave other colours - and I am so not an expert on dyes and dying to say what colours were available! Black was a notoriously hard colour to dye evenly, right up to the Victorian era, so black cloth would be patchy, a rusty sort of colour, or the natural black of black wool.